Stefano Boeri has suggested that a "new Shanghai" made up of "vertical forests" could be built on Mars, should rising sea levels render Earth uninhabitable.

The ambitious Mars-based eco city envisioned by the Italian architect would be made up of his studio's signature plant-covered towers built under giant sealed "space-proof" domes.
The hypothetical project was dreamed up in response to an invitation to imagine what Shanghai might look like in 2117 for Shanghai Urban Space and Art Season (SUSAS) 2017.
The architect came up with the utopian design in collaboration with Tongji University's Future City Lab and the Chinese Space Agency. 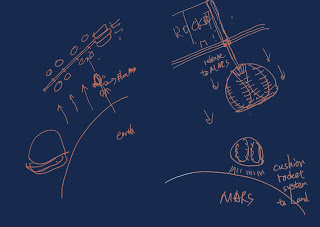 The team imagined that, by 2117, irreversible climate change would force humankind to establish a new habitat in space. Stefano Boeri realised his first "bosco verticale", or vertical forest, in 2014, when construction completed on two 110-metre towers in Milan planted with 900 trees.
The towers' living facades create an urban habitat for wildlife, filter out dust from the city below, while providing a humid, oxygen-rich micro-climate for the occupants of the building.
Boeri has planned similar towers for cities around the world including Lausanne, in Switzerland, Utrecht in the Netherlands, and Nanjing in China. 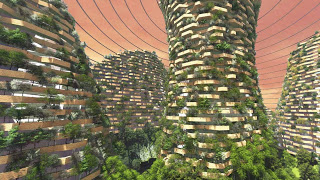 Paris will also be getting it's own vertical forest in the eastern suburb of Villiers-sur-Marne. Called the Foret Blanche, it will be 54-metres high and covered with 2,000 trees.

In June of this year, Boeri unveiled plans to construct an entire city in China covered in vertical forests. The Liuzhou Forest City will provide 30,000 homes and accommodate 40,000 trees, which the architects calculate will lock up 10,000 tonnes of CO2 a year, while producing 900 tonnes of oxygen.

Previous attempts to create sealed bio-domes suitable for use on inhospitable planets have been problematic. The infamous Biosphere 2 in the Arizona desert was the largest closed system ever created.
Experiments were run in it during the early 1990s to test the viability of using such a design in space.
The four scientists sealed in the dome were beset by problems maintaining the delicate balance of the biospheres.
Controlling the populations of plants and animals proved challenging, fluctuating CO2 levels saw oxygen levels drop dangerously low, food became scarce and in-fighting broke out.

A space-living simulation conducted in Hawaii this year was more successful. The NASA-funded project saw six scientists sealed inside a dome on a remote volcano in Hawaii as part of the Hawaii Space Exploration Analog and Simulation, or HI-SEAS. However, it was an experiment to assess the psychological risks of living in close quarters in a remote environment rather than an attempt to simulate a biodome. The structure was not airtight, food was delivered once every few months and the scientists were allowed out whilst wearing space suits.

Boeri is not the only architect or designer to imagine what kind of buildings and tools will be needed for life on Mars in recent years. Recent ECAL graduate Thomas Missé has created a stackable carbon-fibre chair, a lightweight material he hopes will help future space dwellers save on import costs when furnishing their colony. Central Saint Martin's graduate Charlotte Lew's Galactic Everyday collection imagines bringing bedtime rituals to Mars. She designed a range of space suits that would allow the user to take a hot bath before getting into a vacuum-suctioning dressing gown.

Meanwhile Elon Musk is busy making a manned expedition to Mars a reality. In August he teased the first picture of a spacesuit for his SpaceX program on Instagram. "Worth noting that this actually works (not a mockup)," he wrote. "Already tested to double vacuum pressure. Was incredibly hard to balance esthetics [sic] and function. Easy to do either separately." In 2016 Musk presented a timeline for the SpaceX program that would launch the first manned mission to Mars by 2022.