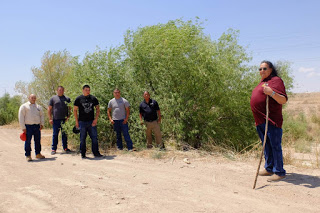 "They go to the river and talk to the river, and the river sends it down," said Sierra, a barrel-chested man with long, greying hair and thick turquoise bracelets at his wrists.

"They put messages in the river that come to us through the water."

But now tribal leaders fear a proposed border wall as envisioned by U.S. President Donald Trump will sever access to the river, spoiling traditions and ruining ancient culture.
The Ysleta and more than two dozen American Indian tribes - designated by U.S. law as sovereign nations governing themselves - live along the 1,900 mile (3,060 km) border with Mexico, with some vowing to fight the wall to defend tribal culture.

Rene Lopez, a member of the Ysleta Traditional Council, said if the chief asked tribal members to knock down the wall, "we'll do it. That's how deeply it means to us."

For while Trump and his supporters say a security wall is necessary to stop drug smuggling and illegal immigrants from Mexico, Indian leaders say otherwise.

"Back off, Trump. Let us be," said Sierra, whose ancestors settled in Texas in 1682 after being forced out of New Mexico during violent conflicts with Spanish settlers.
But experts say the likelihood of stopping the wall with claims of Indian sovereignty or freedom of religion is unlikely, even though for some its impact could be dramatic.

Cut off from land

The Tohono O'odham people in southern Arizona live on a reservation that straddles the border and would be cut in two.

"It would be just devastating," said Verlon Jose, vice chairman of the Tohono O'odham, told the Foundation.
"Walls are not the answer to the issues that we face ... Walls have never solved problems, whether that's in terms of immigration, in terms of militarization." 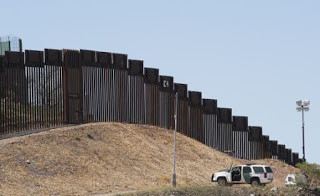 Border security could be boosted with more hi-tech tower systems that provide long-range surveillance, tracking and detection and by immigration reform allowing more migrants to work temporarily in the United States without having to sneak in, Jose said.

A study by U.S. geographer Reece Jones from the University of Hawaii found that in 1990 there were 15 border walls in the world — but now there are almost 70.

"When people are cut off from their land, from their sacred lands and their ceremonies, then the culture dies. Their spiritual vitality is weakened," McLeod told the Foundation.
"A border and a wall are not just symbols. They're very physical insults."

Many Ysleta, a tribe of about 4,200 members, live in low mudbrick houses on a dusty west Texas reservation, already rankled at needing the U.S. government's permission to visit the river.

Fencing guarded by U.S. Border Patrol agents divides Ysleta land from Mexico and from the river bed, and agents must unlock secured gates to let tribal members through. The fencing dates back to a previous U.S. border security effort in 2006.

"We've been doing that for 350 years, and now they want us to ask for permission? It's like you asking permission to go to church," said Sierra.
But arguments of religious and cultural freedom are not likely to hold much weight against the wall, said Gerald Torres, an expert on federal Indian law and a professor at Cornell Law School in Ithaca, New York.

A 1988 Supreme Court ruling allowed the U.S. Forest Service to build a paved road on land that had historically been used by American Indians for religious rituals, Torres said.

The ruling said the government could not operate if it had to "satisfy every citizen's religious needs and desires."
"Tribes' interest in religious ceremonies can't be used to stop the federal government from pursuing its objectives," Torres told the Thomson Reuters Foundation.

Some advocates have argued that Indian tribal rights under the 2007 United Nations Declaration on the Rights of Indigenous Peoples would be violated.

Members of other border-area tribes - such as the Cocopah, the Fort Mojave and the Pasqua Yaqui in Arizona and the Kickapoo who run a casino in Eagle Pass, Texas - have also spoken out against the wall.

Even the Carrizo/Comecrudo tribe, which has neither a reservation nor official recognition, says it would be harmed.

Carrizo/Comecrudo members lived at the river centuries ago before they were dispersed by war and forced migration, Tribal Chairman Juan Mancias told the Foundation.

"We have songs we sing to that river," said Mancias, who lives 200 miles northeast of the river in Floresville, Texas.

"With the border wall, they're disrespecting who we are."

About 700 miles of fencing and wall exist, built as part of the 2006 Secure Fence Act under former President George W. Bush.

But so far no funding for the entire wall is in place. A measure by Congress two months ago provided $1.6 billion for six months work on the wall. Trump asked for $25 billion.

The Trump administration has waived two laws concerning American Indians so it can build part of the wall in California.

One law protects the rights of tribes to human remains, sacred burial objects and other historic items, and the other law protects their religious and cultural practices.
Javier Loera, who holds the title of Ysleta War Captain, said the river has sustained his people for centuries.

"The river is like the veins of our mother earth. Sever those veins, and it's catastrophic", he told the Thomson Reuters Foundation.

[Funding for this story was provided by the International Women's Media Foundation].