menu
© 2022 Eddyburg
Marvi Maggio
We will keep up the fight!
5 Ottobre 2019
Ciao Eddy
He has linked the aim to unveil the roots of inequity and the fight against them. His aims were equity, the free access to common goods and promotion of participation to the government of the public domain, together with the defense of natural resources and landscapes.

Edoardo Salzano, Eddy for friends and for everybody, has been a great comrades and intellectual, a key person in Italy for the territorial and urban issues from the fifties till now. He left us on 23 rd September 2019. It is an immense lost.

He was born in Napoli in 1930. He had a degree in Rome in 1957 and had served as municipal councilor in Rome for the Communist Party (1966-1975). He was professor in urban planning from 1967 and from 1972 he taught in the fist Degree course in Urban Planning in Italy at the IUAV (Istituto Universitario di Architettura di Venezia). He was mayor of city planning in Venice between 1975 and 1985 strongly supporting the safeguard of the city; in 2006 coordinates the landscape plan for the Sardinia Coast able to save this patrimony. He coordinated many urban plans. He was president of the INU (National Town planning Institute) in the period 1983-1991 and left it when the institute chose to support the bargaining with real estate interests instead of fighting against them. All his life he was constantly an actual political activist for social justice.

He has a strong link with the INURA principles, because he has linked the aim to unveil the roots of inequity and the fight against them. His aims were equity, the free access to common goods and promotion of participation to the government of the public domain, together with the defense of natural resources and landscapes. In 2003 he create eddyburg.it , a web site of discussion and action about territory and urban planning that become a reference point for urban activists and researcher on territorial issues. On Eddyburg.it you can find the scientific debate, the political debate and the voice of the people fighting to get the right to the city in all its manifold aspects. It is important to follow his path.

You can find on the web (società dei territorialisti) a wonderful photo of Eddy participating in the demonstration in Vicenza in 2007 against the Dal Molin enlargement of the USA base, holding the banner (together with Alberto Magnaghi) with the statement: “Urbanist against the USA base. Urban question? Zero land consumption”. What an actual link between theory and action!

Thank you Eddy for all what you have done. 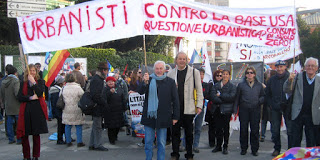